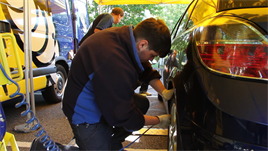 Michelin has been awarded the coveted Tyre Manufacturer of the Year Award at the 2013 Tyre and Fast-Fit (TAFF) awards, held by the National Tyre Distributors Association (NTDA).

The Company picked up the prestigious award at the Association’s annual dinner hosted at the Hilton Birmingham Metropole Hotel.

The TAFF Awards have been held for the last 84 years and are fiercely contested each year. Michelin beat rival tyre manufacturers Continental, Goodyear Dunlop, Bridgestone and new finalist Apollo Vredestein to win the award.

Over the past year Michelin has continued to focus on total performance, incorporating the latest technologies to produce tyres which offer balanced grip, longevity and fuel efficiency to ensure the all-round best performance.

The Company, which celebrated ten years of its PRM (Performance Responsibility Michelin) last year, also continues to promote awareness of issues such as road safety in the community, with a number of programmes taking place in schools and colleges throughout the UK.

Furthermore, Michelin is working to constantly improve its sustainability credentials, with two wind turbines installed in its Ballymena plant in Northern Ireland this year, in addition to an existing pair of wind turbines at its Dundee factory.

Malcolm Scovell, commercial director at Michelin, said: “The TAFF Awards highlight the best in the tyre industry; therefore to be named Tyre Manufacturer of the Year is a great honour.

“Michelin’s innovation has shone through, not just in terms of our pioneering product range, but also our manufacturing methods and efforts within local communities and with stakeholders.”