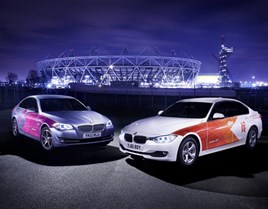 Trafficmaster can now market their involvement in the London 2012 Olympic Games thanks to a ground breaking deal.

Trafficmaster was a supplier of Telematics Services for the Games and have successfully applied for a Supplier Recognition Scheme licence from the British Olympic Association (BOA) to publicise and market their role in making the summer of sport.

The licence allows Trafficmaster to market their involvement with the Games in business to business communications and on their website, and John Lawrence, Managing Director of Trafficmaster Trackstar is delighted with the news:

"The granting of this Supplier Recognition Licence is testimony to the great job all involved achieved in making this happen. Working closely with BMW UK, Trafficmaster supplied Stolen Vehicle Tracking and Fleet Management services to over 800 vehicles, assisting BMW UK in the efficient management of their Olympics fleet, with the added security of knowing they could recover any stolen vehicles during this busy time." he said.

Successful applicants for the licence are also given access to more than 4,000 photos of the Olympic Park being built and can boast of their Olympic involvement in pitches and tender documents.

"It is also a reflection of the strength of our partnership with BMW who introduced us to LOCOG in the first instance and who were delighted with the support we provided at all stages of the event." added John Lawrence.

The Supplier Recognition scheme is the result of a deal between Government, the BOA and the International Olympic Committee (IOC).

Marketing of commercial involvement in any Games had previously been limited to official Olympic sponsors but this Scheme enables eligible businesses to champion their involvement in the Games.

The Scheme is designed to provide a significant boost to the country’s economy by helping firms land contracts on the back of their Olympic involvement.