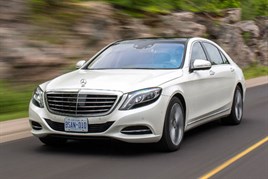 Mercedes-Benz has achieved record-breaking registration performances across the board in October 2013, according to figures released by the SMMT.

Mercedes-Benz remains the UK's fastest-growing premium car brand, with YTD registrations up 19 per cent to 94,231 new cars.  With two months left in the year, the company has already passed last years' total results of 91,006 cars, and has beaten 2003's previous year-end record performance of 93,634 car registrations.  October's growth was 28 per cent, with 8,275 new Mercedes-Benz cars taking to Britain's roads.

High-performance AMG models continue to do well in the sales charts, up 58 per cent YTD with 2,767 cars registered.  Over 300 A 45 AMG and CLA 45 AMGs have already been registered so far this year.

Registrations of new vans were at record levels in October 2013, with Vito reporting a monthly increase of 22.3 per cent (423 vans) and New Sprinter boosting Sprinter's performance by 112.1 per cent (2,206 vans).

Topping off the divisions' success was Fuso Canter, up 92 per cent on October 2012's performance to 96 new trucks.  This all contributes to YTD growth of 7.6 per cent (725 units).

Marcus Breitschwerdt, President and CEO Mercedes-Benz UK, said:  "Last month, Mercedes-Benz UK broke 24 records for best-ever performance across its divisions, and I didn't doubt for a minute that we'd follow that extraordinary record with a record-breaking October.

"We've broken another record in some style, too, with our UK passenger cars business beating a sales record that has stood for almost a decade.  It's a really significant milestone and a fantastic moment for everyone in the company.

"The fact that every division reported its best-ever October results is another perfect home run of records.  It's a great reward for the hard-working teams in our showrooms around the country who take enormous pride in serving more new and returning customers than ever before.

"We're now set for an exciting November and December, and we look forward to rounding off our record-breaking year with a fast finish... Watch this space!"