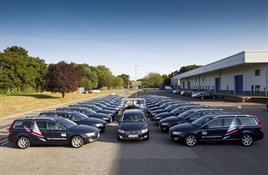 Britain’s top-performing sailors have taken delivery of a fleet of cars from Volvo, marking the start of a further four-year fleet deal with the Royal Yachting Association (RYA).

The 60 cars will be divided between sailors and RYA officials and coaches.

Racing operations manager Chris Hall will manage the 30-strong RYA fleet, branded ‘Driving British Sailing’, while responsibility for the 30 vehicles driven by sailors on the RYA’s World Class Performance Programme falls under the remit of Volvo’s sailing agency, Into the Blue.

For Hall, the new agreement represents an increase in his original fleet of 19 cars, allowing him to better meet the demands of the racing programme which requires coaches and trainers to attend competitions across the UK and abroad.

“Our staff drive hundreds of miles in one go,” he said. “So while they average around 25,000 miles a year – possibly on a par with many other company car drivers – they are generally undertaken in a concentrated period of time.”

One round-trip to a sailing competition can see a few thousand miles driven in just a few days and often that journey would entail towing a boat or a rib.

Hall said: “Nearly all our staff are required to tow boats so we needed to partner with a brand which had vehicles with excellent towing capacity and could cope with the extreme demands we expect of our company cars.”

Many will be towing boats weighing 1.5 tonnes around the UK as well as on the continent.

“We are not your average company car drivers,” he said.

“We couldn’t expect our staff to undertake such rigorous driving on company business without being behind the wheel of a vehicle that can meet our demands.”

The 30-strong fleet provided to sailors on the British Sailing Team also represents an increase in size from the 17 vehicles operated in 2012.

It now means every top-performing sailor or team in each Olympic and Paralympic class will have a Volvo car, while there are also nine pool cars other sailors can request the use of.

The British Sailing Team in the Olympic and Paralympic Classes is managed by the RYA, which is also the national governing body for all forms of sailing, windsurfing, and powerboat racing.

Into the Blue manages the Volvo Sailing sponsorship and look after all logistics surrounding the cars that are driven by the Olympic and Paralympic sailors.

The Swedish marque has had a relationship with British sailors, including Olympic sailing legend Sir Ben Ainslie, since 2001.

Not surprisingly, vehicles that are parked around boats and used for towing receive their fair share of scrapes.
Smart repairs and accidents are managed by Hall and Into the Blue respectively, in conjunction with Volvo Cars UK’s accident management company and insurance providers.

The fleet, which consists of a mix of models, including V40, V60, V70, XC60 and XC90, are all returned within six months for de-fleet when the cars will reappear in the Volvo network or at auction.