Cyclists should be banned from wearing headphones, says poll 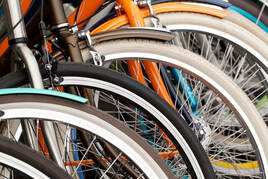 Almost 70% of respondents to an online poll want cyclists banned from wearing headphones.

The ten-day poll, carried out this month by vehicle tracking comparison site TrackCompare.co.uk, was organised after the death of a sixth cyclist in London within just two weeks. The man, in his sixties, died after colliding with a lorry on Camberwell Road.

The poll has attracted wide support and a number of requests for information on hooters and horns pitched to penetrate headphone music.

Kjell Anderton, a director of TrackCompare, said: “Many fleet operators have been deeply disturbed by the deaths and are taking the situation extremely seriously.

“The safety of all who use our crowded roads is now a major consideration and no longer simply a talking point.”

The TrackCompare Cyclists Wearing Headphones poll, carried out this month, asked respondents whether they believed a ban on headphones should be put in place: 69% said yes, the remainder said no.

It assists organisations large and small to identify the most effective tracking and telematics solutions for their operations.