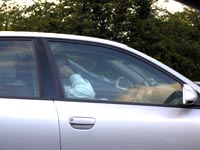 Ten years after the use of a hand-held mobile phone while driving was made illegal, evidence is mounting against the use of hands-free devices while behind the wheel.

New research from distraction expert Dr Amy Guo at Newcastle University has shown the harder a driver has to concentrate on a task, such as dealing with work-related calls, the slower their reactions.

The driving distraction trials involved a series of experiments using a driving simulator. Participants had to engage in a series of tasks using a hand-held phone, a hands-free device or no phone at all.

Results revealed the use of a mobile phone greatly reduced ‘driving efficiency’ – an aggregated score of distraction, inattention, speed control and lane positioning.

In particular, using a hand-held device reduced driver efficiency by half (48.9%), while a hands-free phone wasn’t too far behind with users achieving an average driving efficiency score of 63.4%.

The results suggest that while hand-held usage is more distracting than hands-free, both cause drivers to be distracted to a level which is dangerous to both themselves and other road users.

However, while employers would not tolerate employees driving under the influence of alcohol, most still allow and encourage mobile phone use at the wheel.

Nearly one in five (19%) employees say that their employer is not actively encouraging the safe and legal use of mobile phones while driving for work.

However, figures from the AA/Populus survey reveal that more than one in 20 (7%) feel under pressure to answer their hand-held work mobile when driving for work or commuting.

Meanwhile, 2% said they have been explicitly told they are expected to return emails, texts and calls when they are driving for work or commuting.

It is believed around one in five crashes could be caused, at least in part, by driver distraction and drivers who perform a secondary task are two to three times more likely to crash than those who are concentrating solely on the road.

Brake: ‘no call, text or email is worth the risk’

Road safety charity Brake has launched a campaign calling on employers to ban the use of hands-free phones.

“By following the lead of the few companies already operating complete bans on mobile phones at the wheel, hand-held or hands-free, employers can send a clear message to staff, business contacts and the wider community that they care about the safety of their drivers and other road users.

“They also make it easier for individual employees to comply with best practice safety advice and keep themselves safe. This has the knock-on effect of reducing fleet crashes and associated costs – a win-win for companies.”

The campaign was launched during last week’s Road Safety Week, which saw more than 500
companies take part to raise awareness of the issues of driver distraction.

Energy supplier Npower used the week to raise staff awareness of the dangers of distracted driving and ran a series of hour-long workshops for staff covering defensive driving and avoiding distractions.

Police also showed their support during Road Safety Week by targeting drivers using hand-held phones. More than half a million UK drivers (575,000) have points on their licence for using their mobile phone at the wheel or being otherwise distracted.

One in 15 (6.5%) of these drivers have six points or more for driving while distracted.