Fast-paced start to 2013 for Mercedes-Benz 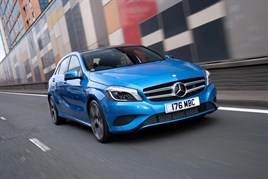 Mercedes-Benz recorded a 7.4% rise in registrations for the month of January, according to figures released by the SMMT.

Among the strongest performers in January was the C-Class Saloon, placed first in its highly-competitive market segment with a 12.8% increase compared with the same period last year.

Likewise, the E-Class Saloon recorded an even stronger start to the year, claiming the Number One spot in its segment with a 30.9% gain in registrations.

Retaining its position as the fastest-growing performance brand in the UK, AMG reported a 75% rise in registrations for January.

Contributing to this high-performance result was the C 63 AMG Estate, the registrations for which rose by 125%.

As the weather conditions deteriorated, registrations of the M-Class rose by 386.3% compared to January 2012 – securing a substantial 14.4% share of the market segment.

The new A-Class captured a 6.2% share of its segment and it will be joined by the CLA four-door coupé in June.

Likewise, Mercedes-Benz made its debut in the small van market as the first examples of the new Citan were registered ahead of its market introduction in the coming months.

Marcus Breitschwerdt, president and CEO of Mercedes-Benz UK, said: “This promises to be an exciting year for us.

“We have advanced and desirable new models being added to our range – the new A-Class made its market debut this year – and we’re looking forward to the arrival of the new CLA and the new E-Class.

"This is bolstered by great new products from our Commercial Vehicles operation – including the new Citan – adding to the surprises in store for 2013."