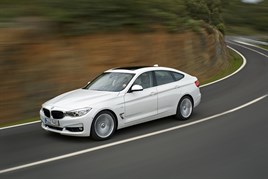 BMW has revealed the new 3 Series Gran Turismo, a niche model that will offer an alternative to saloon and Touring variants in the range.

Longer and taller that existing 3 Series variants, there is more interior space thanks to a longer wheelbase

At launch, three petrol engines and two diesel engines are available, with a choice of either six-speed manual or eight-speed automatic gearboxes.

BMW has focused on the aerodynamics of the car to help maintain fuel efficiency, and the 3 Series Gran Turismo will be fitted with an active rear spoiler.

The model will be priced at a £1,300 premium over the equivalent 3 Series Touring, with BMW citing extended functionality as justification.

Figures for automatic transmission in brackets where different from manual.