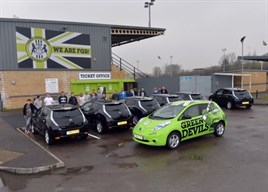 Nissan has kicked-off a sponsorship deal with Forest Green Rovers by delivering 11 examples of its all-electric car, the Leaf, to the environmentally-friendly football team.

The deal, which sees Nissan become Rovers' official car supplier, marks another step towards total sustainability for the forward-thinking Gloucestershire club, which has installed solar panels around its New Lawn stadium, uses a rainwater irrigation system to maintain the pitch and even axed meat from its match day menu.

The cars will be used by the Conference club's players and manager David Hockaday and it’s hoped they will help the Nailsworth club meet its target of cutting those carbon emissions by 80%.

The cars will be charged using renewable energy and the rapid charger recently installed in the club car park can also be used by the fans.

Club chairman Dale Vince, owner and founder of green energy company Ecotricity, said: "This arrangement gives us the chance to push the club forward in terms of its approach to transport.

"Travel is one of the biggest environmental impacts in football, with teams and fans across the country covering millions miles every season by car and coach. We can no longer ignore the issue.

"We've had great success implementing a new ethos at the club by harvesting rainwater, changing the menu and installing solar panels but until now we've not been able to do all we'd like when it comes to transport. The Leaf changes all that.

"We get to show everyone what electric cars are really like, challenge their misconceptions and give them greater exposure."

He added: "I've been driving one for six months now and the fact it's electric has never been any hassle whatsoever. In fact, it's a brilliant car to drive - great fun and really nippy.

"Our fans have been really receptive to all the changes we've made at the club and I have no doubt this deal will lead many of them to look at electric vehicles in a whole new light."