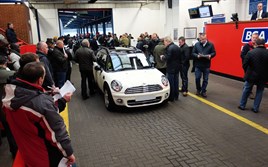 During March the average values of used cars sold at auction across the board decreased from £5,359 to £5,013, equivalent to a 6% decrease between February and March, according to the National Association of Motor Auctions (NAMA).

The decrease in average values can, in part, be attributed to the change in mix of vehicles sold with a higher volume of dealer part exchange vehicles at auction during March having a negative impact on the average price.

The increase in transactional activity in the dealer part exchange sector was in line with normal seasonal changes due to the plate change experienced in March.

Vehicles of this age have steadily gained in value and sales volumes over the past year. The sales volume of cars in this age bracket have increased 67% in comparison to March last year and now account for 6.6% of all cars sold.

When reviewing the fleet sector, the average price fell slightly during March but remains ahead of the values reached a year ago.

Poor new car sales during 2008-2010 continue to have a knock on effect on supply in this sector thus influencing values.

Andrew Hulme, NAMA chairman, said: “The fall in key market factors during March is very much typical for this time of year.

“The market has had to contend with an early Easter as well as higher than forecast new car registrations which have generated a significant increase in stock to the market.

“As NAMA suggested in the March report, these key factors have lead to an increase in supply, a decline in demand and a fall in values that became evident in the rundown to Easter.

“Until there is a decrease in stock and an increase in retail demand and conversion rates, values are likely to continue to fall.

“NAMA expects this in the April and May markets. However this is in line with normal historical patterns and is a seasonal adjustment as opposed to a real market downturn.”