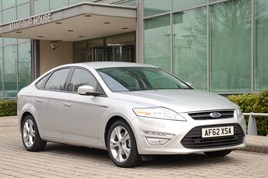 Ford has taken action to boost Mondeo sales following disrupted production through industrial disputes over the closure of its factory in Belgium and against a backdrop of continuing heavy financial losses in Europe.

Although Ford has reported buoyant new car sales in the UK for the first quarter of 2013 and posted a growth in sales in 2012 – in spite of a poor performance elsewhere in Europe – it has admitted sales of the Mondeo have been hit by supply problems caused by unofficial walk-outs by workers.

Ford’s losses in Europe are predicted to continue in 2013, with forecasts recently revised upwards from £980 million to £1.3 billion.

The biggest manufacturer in the UK fleet market is now trying to manage a year’s delay in the replacement of its flagship model caused by its decision to close its Genk plant in Belgium that builds the current model, with the new Mondeo now expected late next year.

However, the sector that the Mondeo competes in has suffered from the growth of premium-badge cars that are often more desirable for drivers and are competitive on running costs with lower-priced mainstream cars, as well as more practical crossover models that seem to have taken over from the default large family car choices.

Cars such as the Mondeo and Vauxhall Insignia appeared regularly in the top 10 monthly registrations in the UK, but the best-selling D-sector car so far in 2013 is the Mercedes-Benz C-Class, while the Nissan Qashqai crossover is the sixth best-selling car.

Fleet News revealed in November that Ford was planning marketing initiatives to tackle the possible effects of the delay as rival products are revised or replaced with new models.

The new editions – Graphite and Titanium X Business Edition – and a lower entry price point seem part of that plan, but Mondeo customers have also been victims of strike action by factory workers in Belgium who have been angry at unions for negotiating a redundancy package rather than argue against the closure of the factory.

Although Ford of Britain sales director Andy Barratt admitted there had been problems with the Mondeo, he was quick to emphasise the company’s strong performance in the UK in the first three months of 2013.

He told Fleet News: “There have been issues around Mondeo supply because of the dispute but these are now resolved
and we’ve been keen to help our customers get around these issues.

“Our overall performance has been enhanced by a lot of new products.

“In March the new Fiesta outsold the next best-selling small car by two-to-one, we have new Kuga making an impression and the new Transit Custom has joined the existing Transit and Transit Connect ranges. Transit was actually the seventh best-selling vehicle in the UK in March.”

The new Mondeo Graphite is expected to be popular with retail customers with its on-the-road price from £15,995 but, more importantly for fleet users, CO2 emissions for the 2.0 TDCi engine have been reduced to 119g/km for most hatchback models (with official confirmation expected on April 22).

The Titanium X Business Edition is based on Titanium X but includes standard DAB, Bluetooth and full leather trim among its extra equipment.

Vauxhall is expected to introduce significant revisions to the Insignia this year, while the Skoda Superb will also undergo a mid-life facelift this summer.

The new Mazda6 offers CO2 emissions from 108g/km, while many of Ford’s rivals have been offering sub-120g/km diesel engines in the 140bhp class for some time.

A Ford spokesman added: “Mondeo’s share of the UK large car market was 8% a year ago, and is now nearer 9%.

“The new additions to the Mondeo range, in Graphite and Titanium X Business Edition, will increase the car’s range to private and company car buyers respectively.”