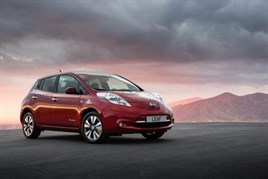 Despite speculation that the 13-plate would deter buyers, UK new car registrations rose by 5.9% in March. During March, 23,576 new Nissans were delivered giving the company a market share of 5.4%, representing a 6.4% increase over the same month in 2012.

Sales of the 100% electric Nissan LEAF went up by 38% over the same period last year, firmly establishing it as the UK's best-selling all-electric vehicle. This comes just a week after Prime Minister David Cameron visited the company's Sunderland plant to mark the start of production of the next generation Leaf.

Nissan's Qashqai crossover model continued to show its popularity, maintaining its position as the sixth best-selling car in the UK in March with 8,465 models sold.

The Juke compact crossover also celebrated its best-ever month with sales of 6,382, over a thousand more than were sold this time last year.

Jim Wright, managing director of Nissan (GB) said: "There's no doubt that the new car market is becoming increasingly competitive, which only goes to show just how impressive Nissan's latest record-breaking sales result is. It's proof that we're offering exactly the right vehicles for UK buyers."

Nissan's LCV range made a valuable contribution to the company's record sales. The multi-award winning NV200 was the best seller in March with sales of 1508, up a staggering 118%.

Nissan will be showcasing the 100% electric eNV200 at the Commercial Vehicle show at the NEC in Birmingham this week.

Wright continued: "We are looking forward to the exciting new products we have coming in the next 12 months including the new Leaf and Note which will be built at our fantastic plant in Sunderland."