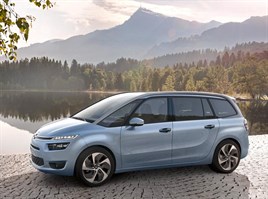 Citroen has released pictures of its new Grand C4 Picasso and announced that CO2 emissions have been slashed across the range.

The 91bhp e-HDi Airdream combined with the semi-automatic gearbox emits 98g/km of CO2 and drinks fuel at a combined rate of 74.3mpg. The more powerful e-HDi 115 is expected to be the biggest seller, and can achieve 70.6mpg while emitting 105g/km of CO2.

A Euro 6 compliant BlueHDi engine fitted with a selective catalytic reduction system will also be available, giving out 110g/km of CO2.

The boost in frugality is partly down to the 110km of weight saved by using lightweight materials and the new EMP2 platform, as seen on the new Peugeot 308 and C4 Picasso.

Not surprisingly, the Grand C4 Picasso looks like a bigger version of the futuristic C4 Picasso. With an 11cm longer wheelbase than the old model, there is more space inside, and 5.7 square metres of glass space means the interior feels light and airy.

It’s also packed with safety features, such as a radar-guided active cruise control which maintains a constant distance from the vehicle in front, and an anti-collision warning system that warns the driver when they’re too close to the car in front.