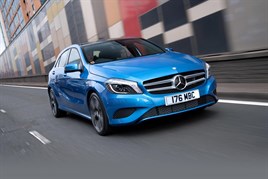 European Union member states are being urged to follow France’s lead and ban the sale of Mercedes-Benz vehicles containing a prohibited chemical in its air-conditioning system.

However, Mercedes-Benz continues to protest its innocence, stating that its cars are type-approved for sale across Europe.

It held an emergency meeting with European Union officials on July 17 in an attempt to resolve the row, which has resulted in France banning some cars from sale.

During the meeting, held with the EU’s technical committee on motor vehicles, representatives from the 28 member states agreed that all vehicles sold within the EU must conform to the law.

The committee recommended that vehicles already sold with the banned R134a must be withdrawn from sale, following the example of the French authorities who are not allowing the registration of Mercedes-Benz A-Class, B-Class and SL-Class cars built after June.

Fleet News reported in April that Mercedes-Benz was accused of breaching rules that came into force in January requiring vehicle manufacturers to use a new gas in the air conditioning system.

Called HFO1234yf, it is said to be significantly less polluting than the previous air-con coolant, R134a.

But Mercedes-Benz claims its tests show HFO1234yf is at risk of igniting if an air-conditioning pipe fractures in an accident.

The company says this could release hydrofluoride gas, which can disable and kill even in very small quantities.

The row has escalated with France banning the sale of A-Class, B-Class and SL-Class models with the backing of the EU, while one MEP has called on the UK Government to follow their lead.

He accused Mercedes-Benz parent company Daimler of “cheating” adding: “The German government has allowed it to get away with breaking the rules. Every car manufacturer in Britain is meeting the requirements.

“We cannot have one law for them and another for their German competitors.

“French ministers have taken steps to protect their car industry against illegal German cars and it is time the transport secretary did the same thing here.

“I have written to the minister demanding he stands up for my constituents’ jobs, for the environment and for fair play.”

However, despite the intense scrutiny on Mercedes-Benz, it is not the only manufacturer which is still using the banned aircon gas R134a.

Volkswagen has also confirmed to Fleet News that it is also using the banned R134a in new cars, including the new Golf, pending official approval of an in-house developed alternative (R744), but the company seems to have escaped the flak of European member states and MEPs.

Fleet News also understands that a number of other manufacturers continue to use R134a in new cars.

Despite using the banned gas, Mercedes-Benz says its cars have type approval for sale across Europe. However, further action by other countries could become a major obstacle to meeting its sales aspirations for the high-volume A-Class model, which is expected to account for up to 25,000 sales a year in the UK.

The model is crucial for Mercedes-Benz as it plays a major role in meeting the company’s target of becoming the biggest-selling premium brand in the UK fleet market, as well as in retail in the UK and globally.

A statement from Mercedes-Benz said: “In our view, the statements of the European Commission do not change the current situation. Our vehicles have a valid type approval issued by the German Federal Motor Transport Authority (Kraftfahrt-Bundesamt, KBA) which is valid throughout Europe.

“As a result, we see no hurdles for the registration of those vehicles in all EU member states.”