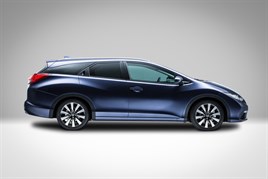 Honda has taken the wraps off the new British built Civic Tourer ahead of its official unveiling at the Frankfurt Motor Show in September.

The Civic Tourer will be available with the choice of two engines: the new 1.6 i-DTEC engine and the 1.8 i-VTEC engine in manual or automatic transmission. The introduction of a new Adaptive Damper System (ADS) aims to enhance stability and comfort under varying load and driving conditions.

Developed and designed in Europe, allowing Honda’s European R&D team to lead the creative and technical design process, the new Civic Tourer will be launched in Europe in early 2014. It will be built at Honda’s UK manufacturing facility in Swindon alongside the hatchback variant and the CR-V and Jazz.

"To achieve true utility on a compact car, you have to consider how to make the most of the space in the cabin, which generally also affects the design. Due to the clever platform of the Civic, we had freedom to optimise the package.

"The end result is a car that has almost a sports-car silhouette. For me, the strength of the car is the synergy of functionality, versatility, and dynamic expression."

Performance, fuel economy figures and full specifications will be released closer to the car's launch.