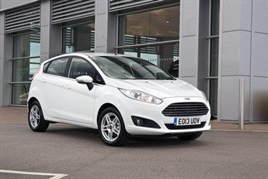 Car sales by Ford in July outpaced the market – with sales up 38.2 per cent against July 2012.  According to the official sales figures from the Society of Motor Manufacturers and Traders (SMMT):

Mark Ovenden, Ford of Britain chairman and managing director, said: "Car sales are continuing their positive trend in the UK and Ford sales are ahead of overall market growth with private customers driving up our share of more profitable retail sales.  Ford's best-ever model range is at the heart of this success, which was underlined in July with every nameplate, from Ka through to Galaxy, increasing sales compared with July 2012."

Ford Fiesta remained the UK's best-selling car in July, increasing its market share by 0.4 percentage points to 5.7 per cent, compared with July 2012.  Sales of the new Ford Fiesta ST are exceeding expectations with more than 3,000 orders placed since it went on sale at the end of March, a sales rate double the projected target.

The Ford Focus secured the number two slot, taking its market share up 1.2 percentage points to 4.5 per cent, compared with July 2012.  Sales success across the Ford model range saw the Ford Ka, Fiesta, B-MAX, Focus, C-MAX and Kuga all increase sales and share in July and for the year to date, compared with the same periods in 2012.

Ford Transit leads the One Tonne, Two Tonne and 3.5-6.0 tonne CV segments, its share of the one tonne segment boosted by the introduction of the Transit Custom and the Tourneo Custom.  Ford Fiesta van also leads its segment, taking a 59.7 per cent share for the year to date.