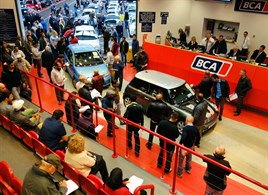 The 2013 BCA Report also reveals that the used car market reached a record high in terms of value in 2012, at £38.1 billion, outperforming the total new car market value by £5.8 billion. In particular sales of younger used cars (0-2 years) increased significantly, rising by 18.6% to 762,000 and reversing a three year trend of falling volumes in this age sector.

However, the long-term impact of the fall in new car sales during and immediately following the recession can still be seen, with the average age of vehicles on UK roads reaching a 30 year high at 7.59 years. There has also been a 5% rise in households without a car, with London recording a 12% increase in ‘no-car’ families.

In terms of sales, dealers continue to dominate the used car market, accounting for 57.2% of all used cars sold representing a massive 74.4% of the total market value.    Dealers sold 4.07 million used cars last year, a rise of 8.9% and, reflecting the changing age profile of the used car market, there was a greater focus on older used cars to mitigate the uncertain supply of younger vehicles.  Dealer sales of 6-8 year-old cars continued to grow in 2012, up 125,000 units (11.1%) to 1.25 million, while more cars aged over 9 years were sold by motor retailers last year than cars aged under two years.

Tim Naylor, editor of the annual BCA Used Car Market Report said: "Our research shows that the used car market has undergone some very subtle yet significant changes over the last 12 months. Customer expectations in the used car buying process continue to climb and there are changes in how information is gathered when it comes to making used car buying decisions.

"Overall, there is a little more confidence expressed by motorists in terms of the economic climate, the products they are buying and the service they are receiving. With improving economic indicators, we could see more people looking to replace their used car with a better used car. The number of motorists saying they ‘certainly’ or ‘quite likely’ will buy a car in the next 12 months rose from 10% last year to 14% this year (a 40% rise in real terms)."

However, recession has taken its toll on car ownership – in the past three years the number of households without a car has risen from 23% to 28% (a 21% rise in real terms.)

Naylor added: "Customer satisfaction levels with their used cars this year are among the highest recorded by the BCA Used Car Market Report. Dealers have been working hard to improve the perception of the used car sector and the product itself is of a much higher standard than even a decade ago.

"However, the effect of prolonged lower new car sales continues to affect the used car market. The average age of cars on the country's roads had fallen to 6.69 years in 2004 but since then it has steadily risen, reaching a 30-year high in 2012.   In fact the car parc will continue to age as the record high new car volumes of the early 2000s wash through.

"It is testimony to the build quality over the last decade that three-quarters (76.3%) of cars now make their twelfth birthday and more than half (51.6%) are reaching the 14 year mark.   In fact, these vehicles provide on-going income opportunities for the retail motor sector.”

"Overall our Used Car Market Report for 2013 suggests that the UK may be turning a corner in consumer confidence as lower inflation, a slowdown in fuel price rises, improving employment prospects and a more stable economy seem to be helping to restore car buyers' confidence. In particular, low and 0% interest offers could be creating fresh demand for new cars, with 40% of motorists who responded to our research saying that they were considering buying new rather than used for their next car.  This is good news for the market as a whole as new cars create used car stock in future."

Key findings
• The ratio of used car sales to new car sales increased for the third year running to 3.5:1 in 2012
• Sales of cars up to two years old rose by 18.6% in 2012, increasing their share of the used car market -  up to 10.7%
• Sales of cars in the three to five year age group also grew by 6.1% and sales of 6-8 year old cars rose for a fifth consecutive year
• Sales of vehicles of over nine years old remained flat
• Hatchbacks increased in popularity in this year's BCA survey with 4% more car owners (51%) choosing this option at the expense of saloons which saw their market share drop by a similar amount to 22%
• MPVs' share of the used car market slipped to 7% from 10% a year earlier
• Diesel-engined cars’ share of the used car market rose 3% to 36%  - a level last seen in 2010, as growing numbers of diesels entered the used car supply chain
• Three quarters of motorists bought a used car rather than new in the past two years with 22% of motorists viewing used cars as offering better value for money than new
• But low or 0% finance would tempt 17% of potential car buyers to 'certainly' consider a new car instead of used next time they change. A further 23% said it was 'quite likely' they would give a buying a new car some thought.
• There was a rise in the number of car owners who said they will 'certainly' or 'quite likely' buy a car in the next 12 months – up 4% to 14% year on year
• Only one in 10 respondents said they would 'buy the same type car again', a 50% drop over the past three years
• Four out of five respondents said they had already taken steps to cut their car running costs – 'keeping tyres at the right pressure', driving more slowly', 'avoiding heavy braking', 'accelerating less quickly' and having 'a more fuel efficient car' at the forefront of measures adopted
• Unsurprisingly, price is the biggest influence on the way used car buyers approach their search for a suitable car, nearly two thirds (64%) of motorists cited it as the key influence followed by brand (39%) and then model (37%).