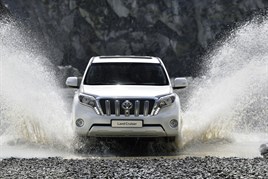 Toyota's redoubtable Land Cruiser will get a new look and new features for 2014 as it makes its public debut at the Frankfurt Motor Show.

The centre console gains a new switch panel that brings together the controls for the on and off-road driving technologies. These include a new selector dial for the five-mode Multi-Terrain Select and five-step Crawl Control, flanked by switches for the all-wheel drive and Adaptive Variable Suspension.

The 2014 Land Cruiser also gains a 4.2-inch TFT colour screen, set between the main meters in the driver’s instrument binnacle. The choice of function has been extended to include an angle gauge, traction control operation on each wheel and the status of the differential locks.

he driver can select the screen functions using a control on the steering wheel, with additional new options including tyre pressure warning, headlamp levelling, traction control “off” confirmation and blind spot monitor alerts.

In the UK, the Land Cruiser will continue to use its 188bhp 3.0-litre turbodiesel engine, matched to a five-speed automatic transmission.

The four-cylinder, 16-valve unit has been revised to meet the latest emissions standards, but with no decrease in performance: 310lb-ft of torque is available from 1,600 to 3,000rpm and 0-62mph acceleration is accomplished in 10.2 seconds (three-door) or 11.0 seconds (five-door); CO2 emissions have been reduced slightly to 209 and 214g/km for the three and five-door models respectively (performance data is subject to final homologation).

Full details of the UK range, including prices and equipment specifications, will be announced later in the year, before the model’s introduction in early 2014.