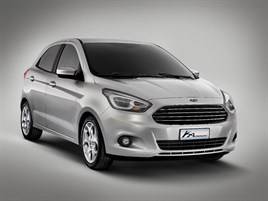 Ford sales in Britain are expected to take a dramatic turn for the better with the arrival of an iconic American sports car, a new SUV range and a trend-setting city model.

Speaking about the UK, he said: “As our market represents over 30% of Ford’s EU19 business, this means we’ll be handling significant extra volume.”

Asked about efforts to retain UK market leadership following Vauxhall’s ambition to be number one by 2016, he added: “They’re free to make whatever statement they want about that, but I’m very happy with our position.

“The products we’ve seen today illustrate how we’re able to stretch the brand to cover areas of the market where we are not represented at present.”

The latest Mustang – the first in the model’s half-century history to reach official UK showrooms – drew applause from a 2,400-strong dealer audience at its European debut in Barcelona.

As part of Ford’s globalisation plan, the next-generation coupé and convertible range is intended to appeal to those outside its US heartland. Available from 2015, it still offers beefy 5.0-litre V8 power but also features a 2.3-litre economy option.

It is understood the most powerful four-cylinder Ecoboost unit yet will produce more than 300bhp to give the car performance on a par with the Focus ST, along with the operating economy to promote limited user-chooser appeal.

Expected to cost from about £35,000, the initial annual UK sales forecast is believed to be about 1,700 units.

“We can’t talk about volume, but we wouldn’t be bringing it in if we didn’t think there was a good opportunity for us,” said Ovenden. “And this move has nothing to do with harking back to the days of the Capri – Mustang is unique and iconic.

“Given the status of this car, I think there’s absolutely no way that a diesel engine would ever go under the bonnet. Some things in life feel wrong, and that’s one of them.”

Also due in 2015 is the Edge, Ford’s contender in the growing sector for bigger, more plush, go-anywhere cars. This model will introduce a Ford system being developed that will allow the car to park itself in restricted spaces or smaller garages at the push of a button while the driver stands outside – and reverses the process the next time it is needed.

However, it will be the following year before the Ka – the model with the potential to attract the most extra sales – reaches the showrooms.

“Mustang is the icing on the cake as we give the brand wider appeal, but at the same time, we’re looking to cater for growth at the lower end with the Ka, for people who don’t want fancy specification but do want economy and efficiency at less cost.”