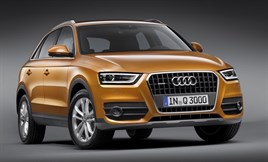 The Audi Q3 has taken first place in this month’s league of fastest selling cars, as revealed by Glass’s this week. The model spent an average of 33.5 days on Britain’s forecourts, and was followed in second place by the Jeep Patriot at 36.2 days, then Jeep’s Grand Cherokee at 36.7 days. Seven out of the 10 top sellers were also 4x4s.

Rupert Pontin, Chief Car editor at Glass’s, said: “At the end of last year all patterns were showing that the seasonality of 4x4s is a thing of the past – however this huge boost in sales over the last month is an indication that weather does can have a short term impact. At a time when widespread storms were forecast and there was concern over the Polar Vortex coming across the Atlantic and bringing snowy conditions, people were running for the nearest 4x4.

“There are three Audi’s in the top 10 which isn’t a surprise, they are really popular cars, and in particular the A1 is in quite short supply – though demand is strong for most models in the Audi range.

“It’s also interesting to see two small cars in the quickest sellers. There is a definite continued trend towards more economic, cost effective cars and this is evident in the new car market as well.”

Moving to the worst performers, Mercedes-Benz R-Class takes the bottom spot for the second month running, with an average of 136.3 days to sell. It is beaten by Ford Streetka at 114.9 days and the Nissan Leaf at 104.2 days.

Pontin continued: “With two Mercedes cars still in the bottom 10 sellers, we seem to be seeing a volume issue and this looks set to continue.

“I’m really surprised to see the very competent Chevrolet Aveo in the slowest seller list – could this be due to over-supply or news in the press that Chevrolet is withdrawing from the UK market?

“Another unexpected visitor in the slowest sellers is the Renault Espace. These have historically been very popular and are in short supply. It could be because the size of the car is becoming less appealing even though running costs for the car are quite sensible.”