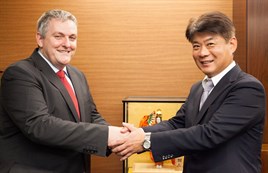 Ichinen Holdings Co. Ltd, one of Japan’s largest automotive leasing companies, has selected the Miles leasing and fleet management solution from Belgium-based software company, Sofico, to manage its fleet of more than 120,000 vehicles on behalf of corporate customers throughout the country.

Ichinen provides automotive leasing, fleet management and contract maintenance as well as fuel sales services in Japan. It has a fleet of more than 61,000 leased vehicles with a similar number on fleet management.

Masashi Kuroda, CEO of Ichinen Holdings, said: “At Ichinen, we had been considering our internal system replacement for some time. After a series of long discussions, we selected Miles from Sofico as our core system. We are confident that this decision will contribute not only to our business development, but also the continuous development of all of our customers and business partners.”

Katsuhiko Kuroda, Vice President of Ichinen Holdings, added: “Ichinen has chosen Miles from Sofico as our core system. We found that Miles is a solution used throughout the world.

“We expect Miles to give us business processes incorporating the world’s best standard among many automotive leasing companies, while still allowing us to maintain our individual approach. We also expect the system will provide strong support for us and all our business partners too.”

To compete for this contract, a team of Sofico experts from Japan, Australia and Europe led by Shane Curran, General Manager of Sofico Services Japan, assessed more than 2,000 individual requirements from Ichinen.

“When we first met Ichinen, they were moving toward issuing an RFP for the replacement of their system. The existing system was more than 20 years’ old and had outlived its useful life. At the same time, it had served them very well and Ichinen were keen to ensure that their next step was a positive one,” Curran said.

“When we began discussions with them, Ichinen had already listed 2,000 distinct requirements for their new system.

“On top of that, they felt that there should be additional functionality available as they didn't want to be forced into a system that restricted their ability to differentiate themselves from their competitors.  They also wanted to minimise the disruption to their existing business, and all of this had to be delivered within budget, of course!” he said.

The Sofico team established that more than 90% of the Ichinen requirements could either be met with standard Miles functionality or through configuration. The team also made recommendations for new functionality and innovations, based on the company’s global experience of the auto-leasing industry.

“Our next step was to provide a detailed proof-of-concept for Ichinen,” said Curran. “This permitted us to not only show Miles could meet their requirements, but also demonstrate Miles’ flexibility and configurability which would allow Ichinen to retain their unique identity in the marketplace.”

Gemar Hompes, Sofico Managing Director, said: “We are honoured that Ichinen Holdings, one of Japan’s largest and fastest growing leasing companies, has selected Miles for the management of its fleet operation.

“Two years ago, we made a strategic decision to invest in the Japanese market. We set up a Japanese subsidiary with an office in Tokyo. This local presence demonstrated our strong commitment to the Japanese market. These investments are now starting to pay off, as we implement our first Japanese customer. We look forward to providing our services and expertise to more Japanese companies in the future.” he said.