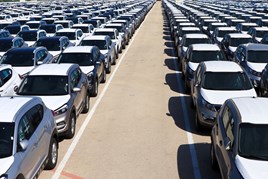 July was the first month in 2016 to see overall decline in Europe's five biggest fleet markets, according to Dataforce.

The 1.4% loss over July 2015 has reduced the year-to-date growth rate to + 8.1% overall. The performance however was different in the individual markets where both positive and negative results were posted.

The French fleet market showed a minor loss of -1.3% for July which means around 450 units less compared to last year. This performance is much better than the one for the private market where the registrations dropped by no less than -15.5%.

The Italian fleet market is still on the rise and outperformed the other four countries with a growth rate of +11.4% (+15.6% year-to-date) and to a certain extent is likely to be receiving a moderate boost with the current government depreciation initiative (expiring Dec 2016). At the same time the Private Market suffered by –6.0%.

Spain was the only other country beside Italy that produced a positive result for the fleet channel, with growth of +5.1%.

After a slight drop by -0.8% in June the July registrations also declined by -1.5%. Given that these are the first month’s figures post Brexit voting they are still not too distressing. On the other hand the year-to-date volume growth of + 5.5% until the end of May has now come down to +3.5% including July.