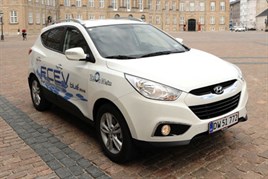 Air Products has signed a leasing contract for a new Hyundai ix35 Fuel Cell vehicle to be delivered in April this year.

This is the first commercial lease granted by Hyundai Motor UK Ltd in the UK. The car leased by Air Products will be one of five vehicles leased from Hyundai as part of the LHNE project, part funded by the Technology Strategy Board in the UK, which was announced in January last year.

Hyundai was selected to supply the cars based on the progress it has made into making hydrogen fuel cell vehicles commercially available. Indeed it was the first global automaker to announce a commercial roll out of zero-emissions fuel cell electric vehicles (FCEVs), with plans to manufacture 1000 units of the ix35 Fuel Cell vehicle by 2015.

The LHNE partners who will be signing lease agreements for the remaining four vehicles will be announced in due course. These vehicles will be utilised by members of the LHNE consortium, to demonstrate first-hand how hydrogen fuel cell vehicles easily operate in the real world. This will support the project’s work to create the UK’s first hydrogen powered transport system across London and the South East.

As part of the LHNE project, the consortium, led by Air Products, will deliver a publicly accessible, state-of-the-art J2601 compliant 700-bar renewable hydrogen fuelling station network, which the Hyundai cars will use to re-fuel.

To establish a viable and standardized network of 700-bar refueling stations, the LHNE project will upgrade the existing fuelling station located near Heathrow Airport and deliver a new fuelling station of the same specification in a central London location. In addition, the project will increase accessibility to Air Products’ hydrogen installation at the Transport for London bus depot in Stratford.

Diana Raine, European business manager hydrogen energy at Air Products said: “We are very excited to be supporting the deployment of hydrogen vehicles in the UK by bringing the Hyundai ix35 FCEV into our business fleet. This is an important step for the LHNE project which is bringing together all the components necessary to make hydrogen transport possible across London and the South East. We hope that this model will be replicated across the UK and Europe in years to come.”

Tony Whitehorn, president and CEO, Hyundai Motor UK, said: “Hyundai is leading the way in hydrogen fuel cell technology and development and we are delighted to supply the first UK examples of the world’s only series-produced hydrogen fuel cell to the LHNE consortium. These cars, along with the help of the LHNE partners, will help to create the blueprint for an expanded hydrogen network for London and the rest of the UK.”