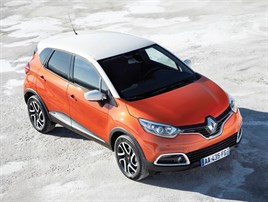 In the final quarter, the first peak period with the new Clio and Captur crossover on the market, retail car sales for the Renault brand increased by 37.6% and a record 125.9% for the group versus 2012; outpacing the retail car market growth of 15.2% in the same period. In these four months, helped by the launch of the Captur, the Renault brand increased its volume in the growing B-segment by a record 98.9%.

Ken Ramirez, Renault UK managing director, said, “2013 has been the first step on the growth path for the Renault Group in the UK. The stunning designs of New Clio and the all-new Captur crossover have reignited desire for the Renault brand, whilst Dacia – the fastest growing retail brand of the year – has brought unique value-for-money to the UK market.”

Meanwhile, Dacia was the fastest growing car brand in 2013, achieving 17,146 sales in 2013 with a market share of 0.76%. This followed its launch in January, initially with only two models in showrooms, Duster and Sandero. The Sandero Stepway arrived in May and Logan MCV in September. 96.7% of Dacia sales are in the retail market where it has a share of 1.4%.  It was also the fastest growing retail brand in 2013.