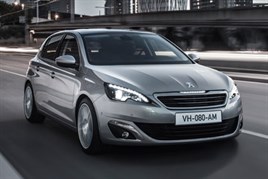 Peugeot has increased sales to retail customers in 2013, while continuing to reduce numbers on daily rental fleets.

Demand for the Peugeot 2008 Crossover has been one of the successes. Launched in July, 3,792 have been registered since – 35% above the new model’s objective.

Peugeot saw retail registrations increase by 6,637 over 2012. The company said that dealers have also seen a very strong mix of sales in favour of higher specification cars, with Allure and Feline models up by  30%.

Neil Moscrop, sales director at Peugeot UK said: “During the last 12 months we have implemented a strategy which, backed by great new product, included a planned reduction in volumes in certain sections of the business, such as national daily rental. To have grown our retail share substantially over the same period is excellent news.”

He added: “Everyone at Peugeot is looking forward to a great 2014, with this month’s launch of the New 308 – already shortlisted for European Car of the Year – the RCZ R and the New 308 SW.”