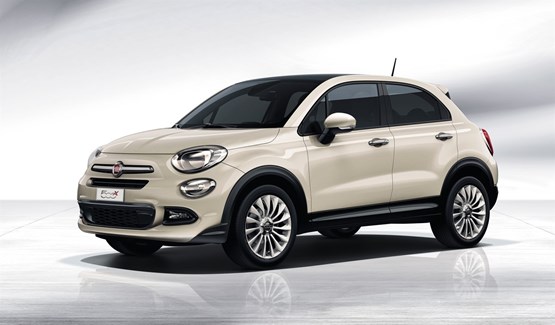 The FIAT 500X is available with a broad range of engines and transmissions, including a new nine-speed automatic transmission. This new, electronically-controlled, nine-speed automatic transmission features "shift-on-the-fly" mapping with the possibility of switching to manual-sequential mode, while the four-wheel drive system it drives adopts a fuel-saving rear axle disconnection system that seamlessly switches between two- and four-wheel drive for full-time torque management without requiring input from the driver. The result is a highly efficient drivetrain that offers excellent pick-up and smooth delivery of power, with sure-footed and dependable handling in all conditions.

The 500X has been engineered to strike the optimal balance of handling and comfort that the segment demands, while the latest active safety systems are available to assist the driver, including front headlights with DRLs; front fog lights with adaptive cornering; sophisticated ESC (Electronic Stability Control); Lane Assist (lane departure warning system) and Blind Spot Assist (lane change assistance system). A ParkView reversing camera is also available in the new 500X, as is the "Brake Control" assisted braking system.

On the more rugged version of the FIAT 500X, “All Weather” mode is replaced by the “Traction” function, which speeds up the transmission of torque to the rear axle on four-wheel drive versions or activates the “Traction Plus” control system on front wheel drive versions, the latter offering an ideal solution to drivers who only encounter extreme low-traction situations occasionally, thereby avoiding the additional costs and slight emissions increase associated with a conventional four-wheel drive system. The FIAT 500X also offers eco:Drive™, which can help reduce emissions and fuel costs by up to 16 percent, in addition to the my:Car™ service (UK availability TBC) which helps with maintenance and dealing with emergencies using an interactive user manual.

The engine range of the new FIAT 500X comprises four petrol engines and three diesels: Front-wheel drive, petrol-powered models are either equipped with a 110hp, 1.6-litre “E-torQ” engine with a five-speed manual gearbox or a 140hp, 1.4-litre Turbo MultiAir II petrol engine with either a six-speed manual or a six-speed twin-clutch transmission. All-wheel drive petrol models, which are equipped with a nine-speed automatic transmission as standard, are powered either by a 170hp, 1.4-litre Turbo MultiAir II engine or the 184hp, 2.4-litre Tigershark engine.

The FIAT 500X also stands out compared to its competitors thanks to its sophisticated 5.0- or 6.5-inch Uconnect™ colour touchscreen infotainment systems. Both systems feature Bluetooth, aux-in and USB connectivity and can be operated via steering wheel remote controls and voice commands. The five-inch Uconnect™ unit is available with TomTom 2.5D navigation while the 6.5-inch system features satellite navigation with 3D maps, progressive route guidance and ‘One Shot Voice Destination Entry’ to enter addresses with voice commands. DAB and a Beats Hi-Fi system, developed in collaboration with Beats by Dr. Dre, are also available.

Built in the updated SATA plant in Melfi, Italy and sold in more than 100 countries worldwide including the United States, the new FIAT 500X will go on sale in the UK in the second quarter of 201