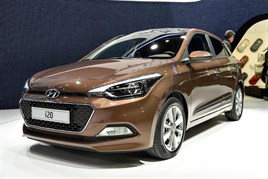 We round up the small cars you should pay attention to from the Paris Motor Show.

It will retain the centre fuel tank layout that is already found in the current model, as well as the Civic and recently-announced HR-V.

Due to go on sale in summer 2015, the new European Jazz will offer improved fuel economy and higher performance thanks to its new engine in Hondas Earth Dreams Technology series.

The new 1.3-litre i-VTEC petrol engine is offered with a six-speed manual (replacing the previous five-speed unit) or a CVT transmission.

Leon Brannan, head of car at Honda UK, said: “The Jazz is a hugely important car for Honda in the UK, and has been a runaway success since its original launch.
“It has an extremely loyal following, its reliability is legendary. The new Jazz with its sleek, modern design, refined and comfortable ride, will, we are confident, build even more loyal followers.”

Honda is promising a more refined and comfortable ride for both the driver and passengers, thanks to a new suspension system.

Growing sales based on a strengthening product line-up and an improved image seems to have given Hyundai the confidence to take on the best Europe has to offer.

The new i20 has an upmarket appearance, and first impressions from the stand at Paris suggest a great deal of time was spent benchmarking against cars such as the Volkswagen Polo and Peugeot 208.

Shut-lines, panel gaps and interior feel is among the best the small car sector has to offer.

The new i20 is longer and wider than the current model, and has a longer wheelbase, and larger boot. But it is also lower and has greater kerbside presence.

The i20 will carry over some engines from the existing range (including the efficient 1.1-litre diesel), but after its initial launch in 2015 a new, low-CO2 1.0-litre turbocharged engine will be added to the range, sitting above the other engines for price and performance.

The car was developed in Europe and will be built at Hyundai’s plant in Turkey alongside the latest i10.