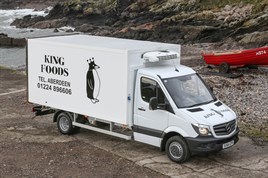 The company runs 18 vans, every one of which bears a three-pointed star. The latest additions to the fleet were supplied, like their predecessors, by Mercedes-Benz Commercial Vehicles Aberdeen.

One is a 5.0-tonne Sprinter 513 CDI Medium chassis, which is fitted with an insulated and refrigerated box body by the Cold Consortium, of York. It has three compartments, allowing the vehicle to carry frozen, chilled and ambient foods at the same time. The other is a 3.5-tonne 313 CDI panel van which was converted by the same bodybuilder.

Distribution Director Ricky King said: “The first vans we bought were by Mercedes-Benz, because they had a reputation as the most dependable on the road. They’ve certainly lived up to that promise over the years, so we have remained loyal to the brand. We also enjoy an excellent working relationship with the dealer’s Van Sales Manager Ross Duthie, and its workshop team – every aspect of their service is first class.

“When you’re delivering fish to exclusive hotels in remote glens you need to be sure your vehicles will get there when they’re expected. Mercedes-Benz gives us that assurance.”