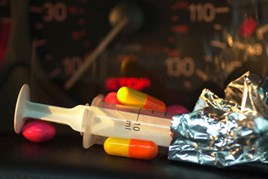 Drivers will be stopped by police and tested for drugs by the side of the road over the Christmas and New Year period as part of a crackdown on drug-driving.

The Telegraph reported that the Home Office has approved roadside testing kits that will analyse samples of saliva instantly to detect illegal substances as well as so-called "legal highs".

The kits can test for prescription medicines (including strong painkillers, sleeping pills and drugs to treat anxiety), that can impair the driver's ability to concentrate on the road.

Ministers are to order police to carry the "drugalyser" kits alongside conventional "breathalysers", according to the Telegraph. It said that officers are expected to begin using the equipment within days.

This is the first time that saliva tests have been approved for roadside use and comes ahead of the new criminal offence of drug-driving, which takes effect on March 2, 2015.

The roadside tests will help to speed up the process of identifying offenders before substances leave their bloodstream.

Currently, officers have to arrest suspects and take them to a police station to undergo blood tests that must be conducted under medical supervision.

Suspects can escape prosecution if they claim to be unable to give a blood sample for religious or medical reasons, allowing time for the drugs to leave their bodies.

The wait for a doctor can also undermine the effectiveness of the tests.

Mike Penning, the policing minister, said: "This is something that has plagued society for far too long.

"People will have exactly the same view of drug-driving as they do of drink-driving: it is an abhorrent thing to do.

"Not only do you put your own life at risk, but you put innocent people’s lives at risk. We will drive this menace off the road.

On the issue of prescription drugs Penning said: "The key is it’s not just about illegal drugs. If you go and get a prescription for strong painkillers it will say on there, ‘This may cause drowsiness, do not use heavy equipment and do not drive’.

"People sadly do, and then you have terrible accidents. We are not penalising motorists. We are trying to keep people safe, exactly as we do with drink."