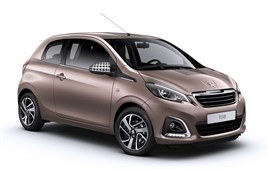 Peugeot has revealed its replacement for the 107 as the forst in a trio of cars as part of a PSA-Toyota partnership.

The 108 is part of the same project as the Citroen C1 and Toyota Aygo with all three cars built at Toyota's plant in the Czech Republic.

The car remains compact at 3.47m long and 1.62m wide and each car manufacturer involved in the project will see to create a bigger styling distinction with the others than their predecessors.

The front of the 108 uses an adaptation of the current Peugeot styling found on the 2008 and 308.

Taking account of some of the developments in the small car sector, particularly the success of the Fiat 500 and the introduction of new models, such as the Vauxhall Adam, there will be more upmarket features available than on the 107 as well as greater scope for personalisation.

The speedometer housing forms part of the steering column, which is adjustable for height, and covered by a cowl to ensure it is legible in all light conditions. It comprises an analogue speedometer and an LCD screen arranged concentrically. Either side, extensions house the rev counter and gear shift indicator.

It is offered with a height-adjustable seat. There is also a seven-inch touch-screen, the starter button coupled with the Peugeot Open and Go system, plus automatic air conditioning.

The car includes electronic stability control as standard, and will be available with autonomous emergency braking. It will go on sale in the UK in July.