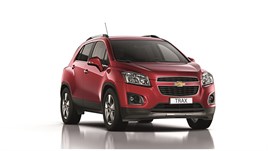 Glass’s has announced this month’s league of fastest selling cars, and with eight out of the top 10 spots being taken by SUV’s/4x4s, there is a clear indication that public concern over recent weather is having a massive impact on the used car industry.

The Chevrolet Trax however beat all of the off-roaders to take number one place, spending an average of 23.8 days on the forecourt. It was followed by the Range Rover Evoque at 31.1 days and the Renault Captur at 33.3 days.

Rupert Pontin, chief car editor at Glass’s, said: “To see so many 4x4s in the league this month is no surprise at all, the weather has been utterly horrendous, and January is always a popular month for these types of vehicles.

“It’s interesting to see Trax at the top of the list bearing in mind Chevrolet is withdrawing from the UK - the trade is showing concern over values of Chevrolet products going forward and new car deals of 30% off new Chevrolet models have been reported. It will be interesting to see what happens to used car demand and trade prices in the coming months.

“Renault Captur in the top 10 is also very interesting. Buyers have responded well to the new car where the trade had been less enthusiastic - this reluctance to accept the Captur by the trade will probably change now that Retail interest is so good.

Moving to this month’s worst performers, the future still remains unsure for Mercedes, with the R-Class still the slowest selling car in the UK, taking an average of 131.1 days to sell. It is beaten by the Ford Streetka at 107.6 days and the Vauxhall Cascada at 95.1 days.

Pontin continued: “It’s not a great picture for Mercedes at the minute. Trade prices for the R-Class are falling fast and there are a total of two Mercedes in the slowest 10 models and eight in the bottom 30. High volume and low demand is what the trade have been worried about over the past year.”

“I am hugely surprised to see the DS3 Cabrio in the Slowest 10 - this car had been seen as fun and trendy if a little ungainly to look at with the roof down. Generally it is better value than Fiat 500 and Mini and arguably more fun to drive. Could it be the badge is holding the car back in a very badge sensitive market sector?

“It’s also surprising to see the Vauxhall Cascada in the Slowest 10. It may be that the trade perception of this being an expensive car is being recognised by the retail buyer which would be a shame as it is generally perceived as a good car if a little slow on the road.”