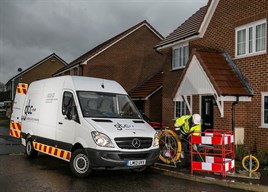 Brookfield Utilities UK, owner of some of Britain’s leading independent energy distribution and utility infrastructure businesses, has added Mercedes-Benz Sprinters to its fleet.

The company’s brands specialise in the construction and ownership of ‘last mile networks’. They include GTC Pipelines and Power On Connections which provide, respectively, gas and electricity connections to the new build construction market.

Brookfield Utilities is based in Bury St Edmunds, Suffolk, and runs a fleet of 120 light commercial vehicles across its various operations. Having previously purchased its vans from another manufacturer, the company decided late last year to switch future orders to Mercedes-Benz.

Since then North east Dealer Bell Truck and Van has supplied its new customer with 11 Sprinter 313 CDIs, all of which are fitted with Edstrom racking systems purpose-designed for the different roles undertaken by field engineers.

Brookfield Utilities group transport manager Denis Chapman said: “We believe in giving our staff the best tools for the job, and with their bespoke racking for each trade our new Sprinters are already proving to be ideal site vehicles.”

Bell Truck and Van has also delivered a fuel-efficient Citan 109 CDI small van, which has been allocated to a manager as a more practical and tax-efficient alternative to a conventional company car. And it is looking forward to a first order for the mid-sized Vito model, which has been identified by Brookfield Utilities as being ideal for its meter installation teams.

Mr Chapman added: “Mercedes-Benz vans are built to a very high standard and lead the market in terms of safety, while we know all about their reliability because we also have a few old Sprinters which are still on the road although just used as spares now.

“The whole life costs of Mercedes-Benz ownership are very attractive, as is the three-year, unlimited mileage manufacturer’s warranty. Our vans typically clock-up 40,000 miles a year and the cover on our previous supplier’s vehicles runs out after 100,000 miles, as a result of which we’ve incurred some big costs due to major component failures outside the warranty period.”

Bell Truck and Van was recommended to Brookfield Utilities by another supplier. “We only approached Bell with a view to benchmarking prices but they came back with the best deal,” recalls Mr Chapman.

“Although geographically they’re a long way from us, they might as well be in the next road – they come down whenever we ask, and nothing is too much trouble. Communication is key in this business and we’re certainly benefiting from the dealer’s personal touch, with regularly updated delivery schedules and vehicles arriving on time and in perfect condition.”