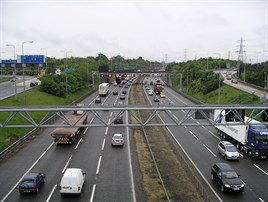 Emissions Analytics has been analysing new car data to look at the impact of 20mph urban zones, and the proposed M1 speed limit restriction.

Constructed using the data from around 400 vehicle tests, covering 90%+ of UK new cars since 2011, the new traffic simulation system will calculate the effect of speed and congestion on fuel economy, as well greenhouse gas (CO2) and air pollution (NOx and CO) components.

The detailed, second-by-second test data collected by Emissions Analytics show how real world vehicle emissions can deviate, sometimes drastically, from official figures. Existing simulation models usually underestimate emissions, because they're not based on data collected in the field. This new approach from Emissions Analytics will prove a more realistic and constantly updated simulation - providing a key insight to current proposals, including the 60mph speed limit on sections of the M1.

Currently under public consultation, the proposals cover the introduction of a maximum mandatory speed limit of 60mph, to operate at certain times of the day on the M1 between junctions 28 and 35a. With a view to mitigating poor air quality in the local area, as well as increasing traffic flow and capacity, the consultation ends at the beginning of March and the scheme could be operational by 2015.

Emissions Analytics' test data for the top five best selling cars in the UK in 2011 show that a drop to 60 mph could result in an average increase in fuel economy of 22%, varying between 15% and 34% depending on the make and model of car. This fall would produce a corresponding drop in CO2 emissions of 19%, cutting the gaseous tailpipe emissions from the vehicles that drive that section of the motorway every day.

However, only detailed modelling of the traffic affected by the proposals would show just how effective the scheme would be.

Founder and CEO, Nick Molden, said: "Vehicle behaviour and performance is changing fast, so it is important to have the most up-to-date dataset. Offsetting the CO2 benefits of lower speed, there may be less pollution improvement than expected as well as longer journey times."

The company holds the largest database of vehicle emissions and fuel economy data commercially available, covering over 90% of new car sales in the UK. The addition of particulate matter measurement to the company's portfolio provides an even greater insight to real-world vehicle emissions.

The same data is also available commercially for projects such as performance benchmarking, fleet cost reduction and optimisation of telematics equipment.