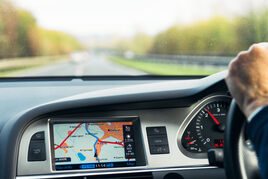 International transport and logistics provider Currie European has improved the efficiency of its fleet by using Masternaut’s telematics system.

Masternaut has been working with Currie European since October 2008, delivering both vehicle tracking and driver behaviour monitoring functionality to the business.

The deployment has generated a marked uplift in the productivity of Currie European’s fleet, which operates across the whole of Europe and was awarded the Transport News Scottish European Haulier of the Year award for 2014.

Masternaut’s system has improved fleet planning, with at-a-glance visibility of every vehicle enabling the organisation to cut down on wasted journey time while sharing exact whereabouts of vehicles and expected arrival times with customers. The driver behaviour module has also allowed Currie European to monitor the safety of its drivers, highlighting habits such as speeding or vehicle idling in order to deliver preventative measures and issue training where necessary. As a result, Currie European has recently renewed its contract with Masternaut for a further five years.

Steve Walls, Business Systems Director at Currie European, said: “Masternaut’s system has had a huge impact on our business. Since bringing on the solution in 2008, we’ve been able to significantly improve the operational efficiency of our fleet.”

Martin Hiscox, chairman and CEO of Masternaut, added: “Managing the efficient coordination of a fleet the size of Currie European is no easy task.  By using our solution, Steve and his team are exemplifying how telematics can be used to not only drive tangible business benefits back to the organisation, but also to deliver significant service improvements to its own customers."