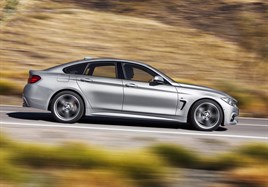 BMW will unveil the third and final member of its 4 Series range, the four-door, BMW 4 Series Gran Coupé, at the Geneva Motor Show on March 4.

The Gran Coupé, aims to provide four-door practicality, greater luggage capacity, with the elegant character of the a coupé, will go on sale on June 21.

The new BMW 4 Series Gran Coupé will be available in the same five equipment grades (SE, Sport, Modern, Luxury and M Sport) as the 4 Series Coupé and Convertible, with the same level of standard specification.

There will be a wide range of engine and drivetrain combinations from the powerful 306hp 435i, as well as xDrive variants, to the new 418d Gran Coupé, which has fuel consumption of more than 60mpg on the combined cycle.

The lowest CO2 emissions for the 4 Series Gran Coupé are 121g/km for manual and automatic versions of the 418d, and the 420d auto.

The shape of the rear bench seat resembles the look of two individual seats, but the upholstered console surface between them can also accommodate a third passenger in the middle.

The back of the rear seats can be folded down as standard in the configuration 60:40 (optionally 40:20:40) to increase the load capacity to 1,300 litres, when completely folded flat.

At model launch, the 420d Gran Coupé can be optionally equipped with BMW xDrive all-wheel-drive technology.

From July the range will be extended with the addition of two powerful diesels to the line-up. The top diesel variant is the six-cylinder engine in the BMW 435d xDrive Gran Coupé, delivering 313hp, while the BMW 430d Gran Coupé has an output of 258hp and develops a maximum torque of 560Nm. BMW xDrive all-wheel-drive can also be chosen on this engine. A 420i xDrive model will also become available.

The entire range of BMW ConnectedDrive options can be ordered for the BMW 4 Series Gran Coupé. Among the highlights are Professional Media package with iDrive Touch, the full-color BMW Head-up Display, Driving Assistant, the glare-free High-beam Assistant, Dynamic Safety and the latest development stage of the Active Cruise Control with Stop & Go function.

Interface technology also permits easy integration of smartphones in the vehicles. This supports the use of the growing selection of apps available, for various entertainment, social media, news and travel information in the vehicle.