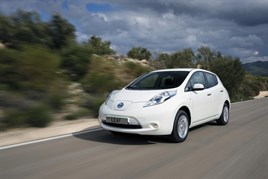 The Nissan Leaf has continued its market leading electric vehicle status in the UK, with 230 registrations in January.

That total was more than 1,000% percent up on sales in January 2013 and clearly shows the Leaf continues to enjoy strong upward sales momentum in the face of growing competition. Nearly three quarters of all pure electric vehicles sold in January 2014 were Nissan Leafs, continuing the trend secured last year.

In December came the sale of the 3,000th Leaf in the UK, followed soon after by news that Hampshire dentist Brett Garner had become the 100,000th owner worldwide.

Jim Wright, managing director at Nissan Motor GB, said: “Momentum around the Nissan Leaf is growing with each passing month and that trend only looks like continuing.

“When we launched the Leaf we were the first manufacturer to bring an all-electric vehicle to market that was both practical and affordable and the success of the Leaf demonstrates we were right to do so.

“Now other manufacturers are trying to play catch-up by bringing their own electric models to market, but the fact that we’ve kicked-off the new year as the leader of the pack puts us in a great position for the year ahead.”