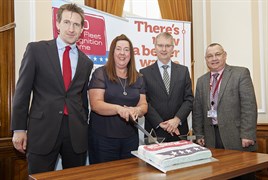 Retail and high value logistics company Clipper has been honoured with an award highlighting the company’s involvement with the ECO Stars Fleet Recognition scheme.

The scheme, launched in 2009, is designed to recognise companies by taking into account factors such as operational efficiency as well as reduction of vehicle emissions and fuel consumption.

Clipper was the first business to sign up to the scheme, which has now been rolled out to regions across the UK, and representatives were invited to speak at a 5th anniversary ceremony. MP for Barnsley Central, Dan Jarvis and Cllr Roy Miller, Cabinet Spokesperson for Environmental Services at Barnsley MBC also spoke at the event and presented the awards.

The schemes are put in place by local authorities across the country, from Dundee to Devon. Across the UK, ECO Stars has signed up almost 300 members, which equates to almost 20,000 vehicles.

Nigel Hinds, operations director at Clipper, said: “Clipper has always been a forward thinking business and we recognise our commitment to the environments in which we operate. We’re honoured to have been involved with the ECO Stars accreditation scheme for five years now and we continue to commit to environmental responsibility across our sites and operations. ECO Stars is a fantastic scheme, endorsed by local government areas.”