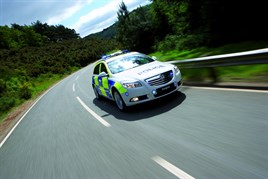 The head of transport at the UK’s fourth largest police force believes others will follow its lead and fit vehicles with sophisticated telematics devices in a bid to manage driver behaviour, improve fleet efficiency and drive down costs.

Steve Thompson, head of transport at West Yorkshire Police, which covers 780 square miles including Bradford, Leeds and Wakefield, has equipped 600 of the force’s 1,100 vehicles with telematics devices from Airmax.

This is currently the largest number of vehicles equipped with driver and vehicle data management systems by a single constabulary.

Thompson told Fleet News: “The introduction of telematics has proved very positive for West Yorkshire Police with no downside. We have had a lot of interest from other police forces and I believe more constabularies will equip vehicles with telematics devices.”

Recently, Northamptonshire Police fitted 315 vehicles on its 420-strong fleet with a telematics device developed in association with APD Communications.

The National Association of Police Fleet Manager (NAPFM) is currently working with the Home Office to put together a framework of suppliers capable of delivering systems that meet both ends of the requirement spectrum. It is hoped the framework agreement will be available in October.

Airmax, which is also fitting telematics devices to vehicles operated by Dorset Police, is a preferred supplier to Vauxhall Special Vehicles. It supplies vehicles to the UK emergency services and Airmax claims that in the last 12 months it has been in contact with almost every police force across the UK.

The company’s system meets the Home Office/Association of Chief Police Officers’ Intelligent Transport Systems One Box Driver and Vehicle Data Management System criteria, which outlines the standards required for driver and vehicle telematics across police forces in the UK.

West Yorkshire Police began fitting the technology to cars in 2009 in a bid to reduce the risk of vehicles being involved in accidents.

An initial trial involving 70 vehicles in the force’s North West Leeds Division proved positive and in 2011/12 a further trial saw a similar number of cars equipped in the Bradford South Division.

Based on the results of both pilot schemes, the decision was taken to equip more than half the fleet with telematics devices in 2012/13, including all West Yorkshire Police marked vehicles and some unmarked vehicles.

As a result, the force has seen a 34% year-on-year reduction in vehicle collision damage, with additional driver training provided where required.

Mileage has also fallen by almost one million miles - 19.67 million in 2011/12 versus 18.72 million in 2012/13 – which has been partly attributed to the use of telematics as well as tighter management of vehicle usage and a slight reduction in fleet size.

Thompson told Fleet News that it also expected fuel savings from a fall in engine idling time and a change in officers’ driving style.

Thompson said: “The rationale for the introduction of telematics was to reduce collision damage and that has proved extremely positive.

“Since then we have learned much more about telematics and the technology’s capability and it is delivering multiple benefits. For example, we can analyse vehicle utilisation and that aids decision-making in terms of fleet size.”

To start a vehicle a driver must use their ID card, which not only identifies the police officer at the wheel, but also starts the logging of the journey against the individual.

The reporting suite available enables a raft of journey and event data to be logged and analysed including ‘blues and twos’ reports - incorporating the type of blue light mode the vehicle is operating under - all of which give time and location for on/off operation, together with speed, revs, acceleration and braking. Information is transmitted to a secure server in real time.

As well as contributing to financial savings, introduction of the technology has been supported by police officers and the Police Federation.

Thompson explained: “In the event of allegations of poor driving being made against police officers we can analyse the information from the vehicle.

“Consequently, the technology can be an aid in any investigation. Police officers have been very supportive of the technology as has the Federation, which has been involved since we launched the initiative.”

Whether West Yorkshire Police fits more of its vehicles with telematics will be determined by the return on investment and individual vehicle usage, but Thompson said: “I would not rule out more fleet vehicles being fitted in the future, but we are comfortable with what we have done at the moment.”

For more on the adoption of telematics by UK forces and the NAPFM’s view, click here.