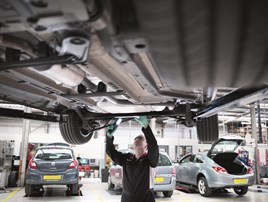 Some of the best selling cars in fleet have a one-in-four chance of failing their first MOT, according to data published today.

Consumer motoring advice website honestjohn.co.uk has looked at data for the best performing fleet cars based on registrations in 2010, and the likelihood of a first time pass.

The Mercedes-Benz E-Class has the best average for first time MOT performance in 2014, and a number of top-selling company cars are close behind.

However, in the website’s worst performing cars, there are some popular company cars, including the Volkswagen Passat, that have shown a higher first-time failure rate.

Some of the failures are based on faults that a driver could spot and report before an MOT, such as windscreen stone chips or cracks in the driver's line of vision.

According to data from the Department for Transport’s National Travel Survey, a company car will cover around 19,400 miles a year, with most approach the 60,000 barrier by the time the first MOT test is due.

But with a trend toward extended replacement cycles for cars, more company cars than ever will undergo their first MOT test while still on a fleet. A failure would result in increased downtime for the vehicle, which would increase the administration burden for a fleet as well as increase costs through sourcing a temporary replacement.

Mercedes-Benz E-Class
86% pass rate
With an impressive MOT pass rate of 86%, the 2010 Mercedes-Benz E-Class is the UK’s best performing company car and it is 25% more likely to pass its first MOT compared to the average company car. According to the Honest John data, the E-Class is 66% better than any other 2010 car when it comes to suspension and 83% healthier when it comes to exhaust, fuel and emissions.


Audi A3
85% pass rate
Missing out on the top spot by just 1%, the Audi A3 is the UK’s second best performing fleet car with an average pass rate of 8%. It’s worth noting that, as this is based on data for cars registered in 2010, the A3 in question is the previous model (launched in 2008 and replaced in 2012), but the results are impressive with the Audi notching up impressive scores for parking brake, drive shaft, springs and suspension.

Vauxhall Astra
83% pass rate
The Vauxhall Astra was the UK’s biggest selling fleet car in 2010, with 54,303 registrations; although, it only ranks third with 83% of cars passing their first MOT. However, overall, the Astra scores highly, with exceptional scores for electrical equipment, lamps and suspension.

Ford Fiesta
83% pass rate
The Ford Fiesta has established a good reputation when it comes to reliability and this is reflected in its MOT score, with cars registered in 2010 (pre-facelift) hitting an 83% pass rate. Ford sold 44,769 Fiestas in the fleet sector in 2010, making it the UK’s third most popular company car, but these high mileage runners haven’t had a detrimental impact on the Fiesta’s average MOT score, with it ranking fourth overall.

Volkswagen Golf
82% pass rate
The Volkswagen Golf has been a fleet favourite for decades and in 2010 it was the UK’s fourth biggest seller, with 39,162 fleet registrations. However, when it comes to performance in the first MOT, the Mk VI Golf is only fifth, with an 82% average pass rate. The model is marked down mostly for minor faults – indicators, fog lights and switches – but it also has some exceptional rates for steering, emissions and electrical equipment.

BMW 3 Series
82% pass rate
The BMW 3 Series was the UK’s sixth most popular fleet car in 2010, with 28,745 registrations. The BMW holds the same ranking in the top 10 performing fleet cars, with an average pass rate of 82%. As with a number of vehicles in the top 10, this data is based on the old model, which was available between from 2005 – 2012, but the results are impressive with high scores for all major parts and components.

Nissan Qashqai
81% pass rate
The previous generation Nissan Qashqai (2007 - 2014) has a strong reputation for being durable and well-built, which is reflected in the MOT data. The Qashqai 2010 model achieved an impressive 81% pass rate in its first MOT, with above average ratings for shocks absorbers, wheel bearings and lamps. However, it was marked down for electrical equipment, brakes and sub frame, which explains its placing in our top 10 performing fleet cars.

Ford Focus
81% pass rate
The Ford Focus was the UK’s second best-selling fleet car in 2010 with 53,738 registrations, but it only sits ninth in the top 10 due to a number of MOT issues with power steering, headlamps and trailing arms. As with a number of cars in our top 10, the 2010 results are based on the previous generation Focus (2008 – 2011) and do not apply to the current model.

Vauxhall Corsa
80% pass rate
The final entry in the top 10 fleet cars is the Vauxhall Corsa, with cars registered in 2010 scoring an 80% average for passing the MOT at the first time of asking. What’s more the Corsa has been a popular seller in the UK, with a top 10 ranking in the fleet sales charts for the past three years.