Prosecution warning over hands-free phone use 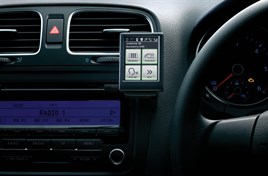 A legal expert is warning fleets and their drivers they could fall foul of the law if they are involved in a collision while using a hands-free phone.

The warning comes in the wake of new research that shows hands-free use has increased from 22% in 2006 to 38% today.

Richard Silver, a motoring offences solicitor, said: “Although many people believe that using a hands-free device will protect them from prosecution, unfortunately the law isn’t quite that simple.

“If a driver is involved in a collision while using a hands-free device, they may still be open to prosecution for not being in proper control of the vehicle, or even for dangerous or careless driving. If the accident is serious, the driver could face a custodial term, even if the use of the mobile device didn’t cause the incident.”

The research, from Brake and Direct Line, found that texting at the wheel is widespread, with three in 10 of all drivers (30%) admitting sending or reading messages while driving, and an even higher proportion of drivers aged 18-24 – more than four in 10 (44%) – doing so.

Smartphone apps are an additional threat, with 12% of drivers using them at the wheel, up from 9% in 2006. 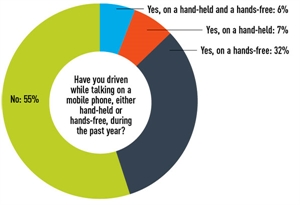 However, Brake says it is the increase in the use of hands-free phones that is particularly concerning.

The effect of talking on a phone on driving has been shown to be worse than drinking certain levels of alcohol. Research by TRL found driver reaction times to be 30% slower while using a hands-free phone than driving with a blood alcohol level of 80mg alcohol per 100ml blood (the UK limit) and nearly 50% slower than driving under normal conditions.

As a result, Brake has renewed its call for a total ban on mobile phone use while driving. Julie Townsend, the road safety charity’s deputy chief executive, said: “The Government needs to act now to stop this risky behaviour.” 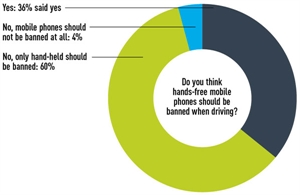 However, fleets remain unconvinced. More than two-thirds (68%) of respondents to a poll believed a ban would reduce their company’s turnover by more than 25%, while a third (36.9%) said they would expect to see revenues cut in half (Fleet News, January 23). But more than 60% acknowledged that the use of a hands-free device while driving does distract drivers, with one in five (21.4%) agreeing that they contribute to serious accidents.

Judging by the comments left on the Fleet News website, there remains a lack of support for a total ban.

Reader Michael Hinton wrote: “It’s no more distracting than talking to your passenger in the vehicle or does Brake want to ban that as well?”

Another thought banning hands-free phones would be the thin edge of the wedge. Angie Ward wrote: “If they ban hands-free, the next step will be to ban sat-nav systems.”

Legally, however, Silver says that employers should seriously consider instructing employees not to use hands-free devices while driving.

He said: “Even if an employee uses a mobile device with a hands-free kit, there is a risk of prosecution to the employer if the police can prove that employees were pressured to use devices to the extent that they become distracted by calls or other interactive communications.

“However, in the circumstances, the safest course of action for employers might be to instruct employees not use a mobile device for any interactive function while driving.”