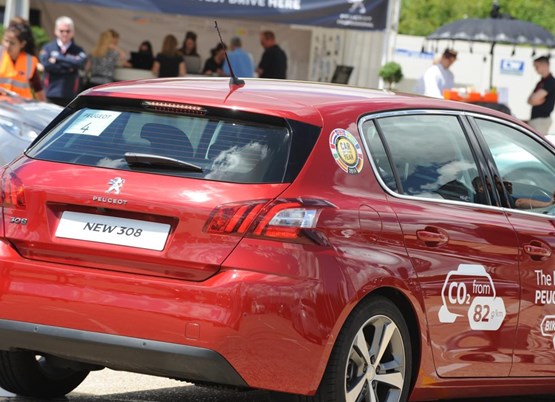 Peugeot expects its new 108, which was on display at CCIA ahead of its July launch, to be a hit with salary sacrifice and public sector organisations.

“That’s where it really fits for us,” said Scott Westerby, national fleet sales manager at Peugeot. “Salary sacrifice is very much on the up. Companies have been a bit reticent because they weren’t sure what HMRC had planned for the longer term but they’ve now got reassurance from the Government that it is here to stay.”

“We’re in the very fortunate position that we’ve got the newest model line-up we’ve had for a long time,” said Westerby.

Shift from diesel to petrol

“We knew we would have interest in certain areas, especially with lower mileage fleet users, but there’s been a general level of interest,” Westerby said.

“That type of technology might lead to a change in the balance from diesel back towards petrol.

“Diesels are becoming increasingly complex with the Euro6 requirements and petrols are a little bit simpler.”

Some fleet mangers are “actively looking at petrol options” for drivers that do a lot of idling and stop start driving due to problems with diesel particulate filters, according to Westerby.

Peugeot’s fleet sales in the first quarter of 2014 “exceeded expectations”.

The brand has been focusing on profitable business – which it labels “the green channel” – and reducing “red channels”.

Volumes have reduced by 90% for its two core red channels compared to last year.

“Our profitability position is well above expectation,” said Westerby.

Peugeot is targeting true fleet sales (excluding Motability) in the region of 60,000 this year.

Dealers will play a critical role in fleet sales following the launch of a business centre programme (see http://www.fleetnews.co.uk/news/2014/5/7/peugeot-launches-business-centre-programme/52350/).

Peugeot has appointed Nick Crossley as head of business sales to look at how Peugeot operates across national fleets, SMEs and retail.

“It’s very easy to focus on selling the product but that’s only half the battle,” Westerby said. “You need to ensure that corporate customers have full support throughout the life of the vehicle.”

The standards that business centre dealers have to subscribe to focus on minimising downtime and keeping a company’s workforce mobile – an issue which is increasingly important for commercial vehicle fleets, according to Westerby.

“We’ve far exceeded our sales plan which is good but it does bring extra challenges because all the factories work to tight tolerance,” said Westerby. “We’ve learnt that you can’t over promise with customers. You’ve got to tell them exactly where you are in terms of lead expectations.”

Most popular articles in CCIA News