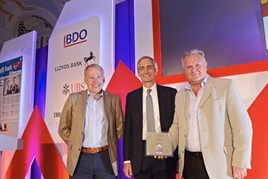 Leasedrive picked up the ‘Value Creation Award’ at the fifteenth annual Sunday Times BDO Profit Track 100 awards for increasing the company’s value by more than 10 times when it was sold to HgCapital last December.

Leasedrive also received a ‘profit star’ certificate for being ranked 36th in the latest The Sunday Times BDO Profit Track 100, which ranks Britain’s 100 private companies with the fastest-growing profits over the past three years of available audited accounts.

It was the second ranked company in the South East of England region and climbed 10 places from its ranking last year.

Roddy Graham at Leasedrive said: "The Value Creation Award, along with our third appearance in The Sunday Times BDO Profit Track 100, really does independently support HgCapital’s own view on the management expertise and capability within our business.

"While the award credited David Bird and I personally, we could not have achieved what we have done without the excellence of our people who continually deliver the highest quality bespoke vehicle management service to our customers.”

The Sunday Times BDO Profit Track 100 original citation* read: “This vehicle management firm was created in 2007 through the merger of Leasedrive and Velo. It leases 42,000 cars and vans to blue-chip companies across Britain such as Marks & Spencer, and advises on fuel efficiency and taxation. After buying rival Masterlease in 2011, managing director David Bird, 55, saw profits lift to £13.4m in 2012. It is integrating its operations with Zenith, a competitor also owned by HgCapital.”