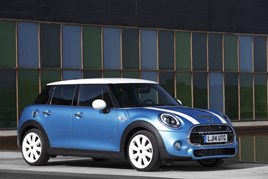 Mini is seeking to boost its share of the small car market in the fleet sector with the first five-door version of the Mini hatchback, which is now available to order.

Since the first BMW developed Mini hatchback went on sale in 2001, it has only been available as a three-door car, and while the company has recently introduced a five-door model in the Countryman, it straddles the lower-medium and crossover sectors.

Last week Mini revealed the five-door hatchback, which will make its public debut at the Paris Motor Show in October. Deliveries of Cooper and Cooper S models will begin later that month, while One variants will follow late in November.

Since the introduction of the BMW Mini, depreciation and SMR costs have usually been class leading, while since the introduction of the second-generation model and the adoption of new engines and fuel-saving technology, it has also had very competitive fuel costs. Diesel versions of the new five-door model have CO2 emissions below 100g/km, and fuel consumption on the combined cycle of more than 72mpg.

The small car sector in the UK totalled more than 366,000 registrations in 2013, of which around 70%. Mini’s current share of the sector with the three-door hatchback is 7%.

Mini’s own research shows that the most common reason people choose another car after having a Mini hatchback is because they have ‘outgrown’ it.

The five-door model has a longer wheelbase with more leg room, headroom and elbow room for rear seat passengers, as well as a larger boot.

James Morrison, corporate development manager for Mini, said: “The five-door Mini hatch is the biggest piece of the jigsaw puzzle for us, as fleet policies that exclude three-door cars have become increasingly prevalent.

“We are already aware of the demand for a five-door hatchback from our current corporate customers, and we think there is a role for the car as a salary sacrifice choice, a job need car and among user choosers.”

The five-door Mini hatch will be priced at £600 more than for the three-door model, with on-the-road prices starting at £15,900.