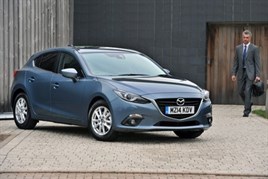 New car sales in the three months April-June, 2014 - the first quarter of Mazda's 2014/15 financial year - increased by more than 850 units (25 percent) with fleet registrations accounting for 71 percent of the growth.

Underpinning the rise in demand was that almost two-thirds of the increase in fleet sales came in the core corporate segment - end-user fleets and contract hire and leasing companies - which excludes daily rental registrations, Motability and captive registrations.

Demand in the quarter under review saw total fleet sales rise more than 50 percent versus quarter one 2013/14 accounting for 1,775 registrations - a 24 percent share of total Mazda sales of almost 7,400 units.

Head of fleet Steve Tomlinson said: "User-chooser demand is driving Mazda's fleet performance. The Mazda6 has a proven record as a popular company car over many years, but this year's launch of the all-new Mazda3 is proving to be a compelling proposition for drivers."

Tomlinson added: "Mazda more than doubled fleet sales in 2013/14 to 8,300 and that was due to demand from the core fleet sector. Our performance in that critical segment is already significantly stronger than the industry as a whole and we are looking to maintain that focus."