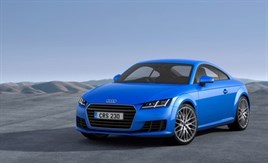 The all-new Audi TT is available to order in the UK ahead of first deliveries in December with the new 184PS ultra version capable of 67mpg with CO2 emissions of 110g/km.

Two specification levels - Sport and S line - will initially be offered in the UK for the all-new TT. Both include the Audi virtual cockpit, which is based around a 12.3-inch, high resolution LCD display that completely fills the driver's instrument binnacle and replaces the traditional analogue dials.

Drivers can choose between two display modes: In the classic view, the speedometer and rev counter are in the foreground; in "infotainment" mode the virtual instruments are smaller. The space that becomes free as a result provides ample room for other functions, such as the navigation map.

At the lower edge of the Audi virtual cockpit, the displays for outside temperature, time and mileage are permanently visible. Warning or information symbols are also displayed there.

Complementary comforts also include Alcantara and leather combination upholstery for the standard sports seats and manual air conditioning with controls integrated into the air vents in another break with convention.

S line specification is the most comprehensive and the most performance-oriented in the initial TT line-up. It adds larger 19-inch alloy wheels with a five-arm star design, all-weather LED headlights and LED tail lights flanked by dynamic rear indicators with a directional sweeping function and S line body styling.

From the options list, even more of the Audi virtual cockpit's potential can be unlocked by the Technology Package, which includes hard disk-based navigation mapping that can completely fill the 12.3-inch TFT monitor, and also beams the Internet to the car via Audi connect.

This brings features such as Google Maps, Google Street View, Audi traffic information online, price-graded refuelling locations in the vicinity and the latest news, flight and train information to streamline every journey.

It also adds Audi music stream and access to social media services such as Facebook and Twitter. For sound that is as attention-grabbing as the cabin's visuals, a 680-watt, twelve-speaker Bang & Olufsen audio system can be specified in addition.

On the outside, the range of nine paint colour options for Sport models includes two shades that are new to the Audi range - Tango Red and Nano Grey.

The list of available colours for S line versions includes one extra choice - Daytona Grey. Another highlight exterior option is matrix LED headlights, each of which features 12 separate LED bulbs which dim individually when sensors detect oncoming or following traffic to automatically divert light around obstacles without the need to deactivate the high beam setting.

At 4.18 metres long, the Coupé is almost exactly the same length as its predecessor, though its wheelbase has grown by 37 mm to 2,505 mm, making for especially short overhangs. It is 1,832 mm wide, and has the same height as the previous model at 1,353 mm.

As a 2+2 seater, it is a sports car that is suitable for everyday use, with a load area capacity of 305 litres - 13 litres more than before - which can be increased to 712 litres by folding the rear seat backrests forwards.

The 2.0 TDI - one of two engine options available at launch – powers the exclusively front-wheel-driven and six-speed manual-equipped ultra model.

Helped by a strong torque peak of 380 Nm, it can accelerate from 0 to 62mph in 7.1 seconds and reach a top speed of 150mph. It can also return up to 67.3mpg according to the combined cycle test, which translates into CO2 emissions of 110 g/km.