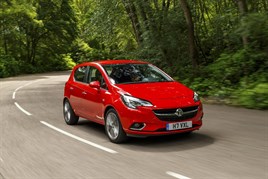 Vauxhall has announced further technical details on its all-new Corsa.

Meeting the latest stringent Euro 6 emissions regulations, the ECOTEC will be available with either 90PS or 115PS outputs, each of which achieves 170Nm of torque from just 1,800rpm.

The 90PS-powered three-door 1.0-litre version consumes just 54.7mpg on the combined cycle. There are also Euro 6 compliant 1.2 and 1.4-litre naturally-aspirated units with 70PS and 90PS.

The 95PS diesel paired with 5-speed manual transmission and braking energy recuperation system – can reduce the three-door model‘s CO2 emissions down to 85g/km and fuel consumption down to 87.8mpg in the combined cycle.

Pricing will be announced on 2nd October with first models going in to production later this year.