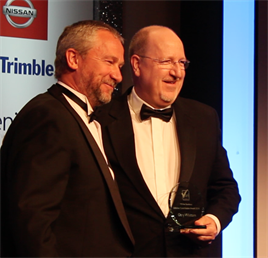 Whittam has made extensive contributions in the development of standards and helped establish the Van Excellence Code and reputation over the past four years.

Mark Cartwright, FTA head of vans said: “FTA Van Excellence owes a lot to Gary. He worked with us in developing the standards and lent the scheme significant credibility in its formative years. Simply put his unrivalled knowledge and pragmatic views helped crystallise the development of the Van Excellence Code whilst his reputation and renowned integrity opened doors for Van Excellence to grow into the industry scheme it is today.”

Whittam’s extensive knowledge of the van industry stemmed from starting his career as a technical apprentice with Arlington Motors Ltd in 1972; he studied for the City and Guilds Full Technological Certificate and Management for the Institute of the Motor Industry (IMI) and Institute of Road Transport Engineers (IRTE).

Whittam later Joined Ford Motor Company as a technical writer and was zone manager of the year for three consecutive years, and in 2003 became director - commercial vehicles  Ford of Britain - responsible for the largest CV market outside of the US.

Cartwright added: “Gary joined FTA in 2007 as Industry Champion for Vanfta and more latterly Van Excellence. His contribution to UK van operations is enormously impressive and it is FTA’s great pleasure to award him with the first Van Excellence Lifetime Contribution Award.”