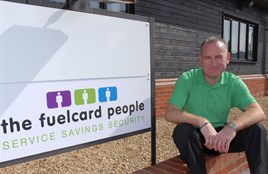 The Fuel Card Group is targeting growth in the fleet management sector two years after launching a mileage capture system.

However, the company quickly realised that the web-based system could provide the platform for a number of other fleet management applications.

“However, after launching the system it began to snowball. We launched a dongle to track journeys to make the system more foolproof and then customers began asking us if it could be developed to provide other services.”

For example, a grey fleet management module provides fleet managers with an automated system for checking vehicle insurance and MOTs, as well as keeping track of business journeys.

It was trialled with public sector fleet management company GMP Drivecare and is now used by 20,000 drivers.

The different modules include CostCount, which compares wholelife costs for vehicles, and ServiceCount, which allows fleet managers to access service schedules, as well as manufacturers’ specified service and repair times.

There is also a licence-checking module, while an expenses package is being developed. Clarke said further features will be added in the coming months.

He said: “It’s become a fleet management package for people driving their own vehicles or company assets.

“Different elements can be tailored for individual needs and you don’t need to be one of our fuel card customers.

“MileageCount sucks all the data off our fuel card system, but it can just as easily access the data from another card provider. At the end of the day, it’s all about helping fleets save money.”

A dedicated sales team has been tasked with selling MileageCount to new prospects and Clarke is targeting substantial growth in the sector.

The Fuel Card Group, which incorporates The Fuelcard People, has already seen significant growth over the past few years.

Clarke explained: “Historically, the cards we sold were mainly for the HGV market, because they were more fuel conscious.

“But, as the price of fuel went up, we saw the opportunity to sell fuel cards to people running light commercial vehicles and more recently company cars.”

There are effectively two types of cards available to fleets: retail cards based around pump prices, where the company makes it money through transaction charges, and fuel cards that offer a commercial rate.

Typically, that means a saving for fleets of three to four pence per litre (ppl) or  up to 10ppl on the pump price if buying fuel from motorway forecourts.

Turnover for The Fuel Card Group’s fuel card business, not including bulk fuel sales, was £684 million last year, based on annual sales of 700 million litres of fuel.

It caters for around 51,000 businesses, from single-vehicle companies to fleets running thousands of vehicles, which use approximately 300,000 fuel cards between them.

A growing customer base has also been reflected in staff numbers with the business now employing 250 staff across five locations, with its head office in Leeds.

Clarke added: “We’re focusing more on how we can service our customers and help them with the day-to-day running of their fleet, rather than relying quite so heavily on the margin we make from fuel.

“That’s why we have been introducing other products and services.

“We will always be a fuel company, but we are now moving more towards fleet management.”