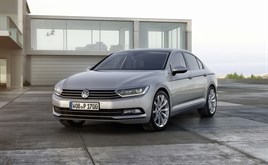 Premium car quality with a mainstream new vehicle price tag will spell success for the all new Volkswagen Passat in the battle of the ‘big five' company cars, says pricing expert CAP Automotive.

It's a sector that is hotly contested by five giants of the company car world - Audi A4, BMW 3 Series, Ford Mondeo, Mercedes C Class and Volkswagen Passat - which means every new launch is critical for a manufacturer.

Key to success in this market is driver appeal to attract company car choosers, together with competitive depreciation so that fleets can offer the best possible contract hire rates.

According to CAP the all new Passat wins on both counts, with premium car quality normally associated with prestige badges and lower cash depreciation forecast than for any of its German rivals.

The strength of the Volkswagen brand - which is now knocking on the door of premium car status in the form of the new Passat - is revealed by the fact that CAP is forecasting a three year old car to be worth more than its BMW and Audi rivals at the same point.

CAP senior forecasting editor Dylan Setterfield said: "People might reasonably assume that a Volkswagen would generally be worth less as a used car than the equivalent models from more traditionally premium image manufacturers, like Audi and BMW.

"In reality, though, we are anticipating the new Passat to be worth £10,900 in the trade market, after three years, which is £325 more than our forecast for the Audi A4 and £725 above the BMW 3 Series.

"Volkswagen has kept to its ethos of evolution rather than revolution, with the new Passat. Even though everything has changed under the skin, there'll be no question of unsettling the existing Passat fan because the outward changes remain quite subtle.

"It's fair to say that this new model will keep the loyal Passat chooser happy while tempting those drivers who want a premium car without the premium new price tag to try a Volkswagen for the first time."