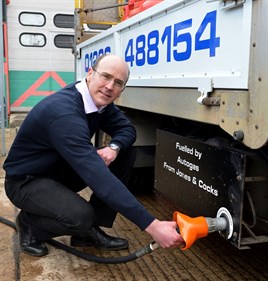 Guy Lachlan, owner of Jones and Cocks, an online hardware store based in Aylesbury, is urging other businesses to consider LPG after saving around £15,000 on fuel costs over a five-year period.

Lachlan said: “I bought the business in 2009 and straight away it made sense to convert our vehicle fleet to run on LPG. We cover roughly 70,000, mainly rural, miles per year. As a proportion of our business is delivering LPG gas bottles for people to use as home fuel, BBQs and outdoor heaters it seemed ridiculous that we weren’t also driving on LPG.

“For us it provides not just a cheaper fuel solution, although the savings are a fantastic benefit, but a cleaner and quieter fuel than if we were running on diesel. We now run a varied fleet comprising of three Transit pick-ups, a Dodge pick-up and our own personal car which is a Range Rover we have had converted to LPG. The payback for the conversions was made well within a year so for us it has proved extremely economical. ”

Diesel has long been the default choice of fuel for those running commercial vehicles but as recent news and reports highlight, this is potentially causing rapidly increasing air pollution problems, particularly in urban areas.

Many of London’s roads regularly exceed safe air pollution levels. According to a Better Health for London report published in October 2014, 4,200 Londoners die as a direct result of air pollution every year.

Lachlan continued: “I’m mystified as to why more businesses are not running vehicles on LPG. There is a huge disparity between the UK and the rest of Europe, and in comparable economies, with many more vehicles running on LPG. Why is this? Lack of manufacturer support has probably been an issue. It seems crazy that LPG vehicles are made here for export to Europe but not offered for sale."

In December 2013, the Chancellor of the Exchequer set out a 10 year duty trajectory for gaseous road fuels that ensured that LPG autogas will remain significantly cheaper than petrol and diesel.

The Government also recently awarded a number of successful UK local authority bids financial backing from its Clean Vehicle Technology Fund. Among those granted funding was Birmingham City Council, which will convert 80 of the city’s taxis to run on LPG autogas.

Lachlan said: “There is now Government backing so it’s time for more manufacturers, councils and businesses that run commercial or fleet vehicles to take a good look at LPG autogas. We’ll continue to run our existing and future vehicles on LPG and I hope that other business owners will realise the potential it can have in reducing costs and helping solve the ever growing problems we have with air pollution.”